One of the great religious edifices in the United States 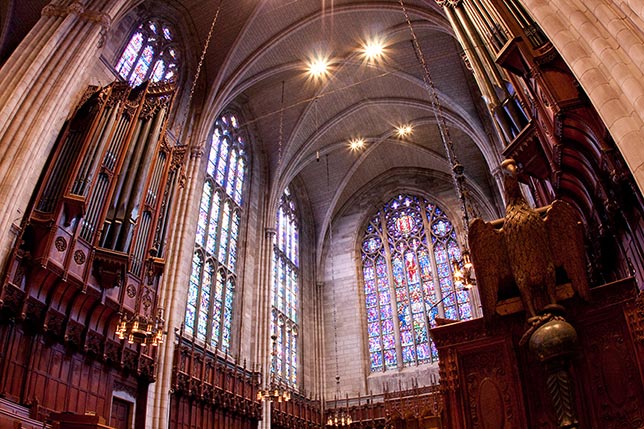 It is in the Chapel that the University comes together as a community. This is true at Opening Exercises, Baccalaureate, and annual memorial services for alumni and staff of the University. It has also been a bridge between town and gown, and between the several academic communities of Princeton.

The University Chapel was built in response to the devastating fire which destroyed the Marquand Chapel in 1920. The fire forced the trustees and president to give immediate attention to the issue of constructing a new chapel which would permit the University to maintain its religious heritage, but in a manner that recognized its public mission in an increasingly multicultural society. University President, John Grier Hibben, issued an appeal for funds to construct a chapel in an architectural style based on the fourteenth century English Gothic and appointed Ralph Adams Cram as the University’s supervising architect for this project.

At its founding in 1746 the College of New Jersey was first located in the parsonage of the Presbyterian Church of Elizabeth and soon afterwards in a sister church in Newark. When the College moved to Princeton in 1756, the chapel was located in what eventually became the Faculty Room in Nassau Hall. This arrangement lasted until 1847, when a separate building was constructed on the site of East Pyne. However, by the end of the Civil War a new chapel was needed because the number of undergraduates had doubled. Henry Gurdon Marquand, a founder of the Metropolitan Museum of Art, was the principal donor for the Marquand Chapel, which was built in 1881. This chapel was destroyed by fire during house party weekend in 1920, and, for several years, worship services were held in Alexander Hall, the place where Professor Woodrow Wilson had delivered his address “Princeton in the Nation’s Service.”

When completed in 1928 at a cost of more than two million dollars, this imposing college chapel, capable of seating two thousand, was second in size only to the chapel at King’s College, Cambridge University. The style conformed with the tudor Gothic that had been adopted for Blair Hall in 1897 as well as other buildings that were constructed during the succeeding several decades.

Today, enhanced by its elegant beauty and charm, the Chapel has been an attractive site for frequent weddings and memorial services for alumni, faculty, and many other friends of the University. Its magnificent Mander-Skinner organ, which was completely renovated in 1991, provides excellent accompaniment for the superb sixty-voice choir and for other concerts and occasions, including the several ceremonial, non-denominational events that the University holds here each year.

In addition to the various denominational services held throughout the week, an ecumenical service is offered by the Dean and the Associate Dean of Religious Life each Sunday at 11:00 am (10:00 am during summer). The Deans are also joined by an array of nationally known guest preachers throughout the year and Princeton University students act as Chapel Deacons, assisting the Deans in leading the weekly worship. The service is open not only to the entire Princeton University community but to townspeople and visitors to Princeton as well, who are most-warmly welcomed.